ORP and MAC and Mobile Approvals

Probitas Solutions is introducing the first line of our products that allows for document approval for MAC and mobile users. Our Outlook Add-in will now be sold with an additional MAC and Mobile module for a minimal extra fee.  This will allow for MAC and mobile recipients to approve, but not initiate documents.

If an offsite approver address is found on the routing slip, then a special footer will be placed on each message body of all routed messages for this routing process.  This footer message will have instructions for downstream recipients telling them that they simply need to forward this message to the designated recipient (which will be specified in the footer), and they simply need to type “orp approve”, or “orpapprove”, or “orp_approve” in the message if they approve this message.  When a message with one of these encoded bodies is forwarded the specified recipient will be given a special instruction popup when he/she clicks the message inside of outlook (for this to work, ORP outlook needs to be installed on this computer with the ORP MAC and Mobile module present).  The user (likely this will normally be the initiator of the routing process) will then choose to approve the message on behalf of the MAC or mobile user and from there, routing will continue as normal.  A special status icon will be shown in the main grid for any messages approved by a MAC or mobile user in this manner.

In the following screenshot, the first arrow shows that the icon has change to a female icon with a checkmark, which is different from the regular checkmark icon.  Hovering over this icon shows the tooltip popup indicated by the second arrow. 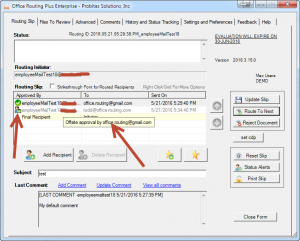 Office Routing Plus and Government Sales

For a sampling of other ORP customers, see http://www.office-routing.com/en/clients.php

New Product Highlight: ORP For Outlook
With our new ORP Outlook product, users can route any type of document (not just Excel and Word documents as is the case with our other products).  This allows for routing Adobe PDF documents, Excel, Word, Powerpoint, bmp, jpg; any type of document that can be attached to an Outlook email can be routed with this product! Users can also route multiple documents for review in one single routing process.  The other main advantage of our Outlook product over our other product offerings, is that the Outlook product allows for real time tracking of where the routing process is, without hunting through tracking emails in your inbox.  A history and real time tracking screen allows initiators and others who are signed up for status tracking to quickly view the status of any routing processes that are out for review.  This allows for quicker administration and more efficient organizatin of routing processes.

Existing ORP Excel/Word customers may request to purchase the upgrade to ORP Outlook by emailing orpsales@office-routing.com.

Recent Product Upgrade Announcements
Note all of our products have been compatible with MS Office 2013 since April of 2013.  As well, some customers on older versions of our products may need to upgrade in order for ORP to work with Office 2010.
ORP Enterprise

ORP Document Merge Feature in MS Word –  Enterprise version only.  Our ORP Enterprise version not only has enhanced features over our Standard routing product such as routing history, but it also has a great feature for companies that utilize parallel routing (the route all at once option that can be set by the initiator on outgoing documents). The ORP document merge feature allows you to merge documents into a final document if you are the initiator and a document you routed using the All At Once feature is returning to you from a downstream recipient.  This feature utilizes the history feature of ORP Enterprise and stores a pointer (which you can update in the merge screen) to the initial file.  Then, as each recipient returns a document to you, ORP Enterprise will detect that All at Once routing was used and it will take the new file sent to you and give you the option to merge it to your initial file. The Track Changes feature will show you the changes each recipient made.  This process will then be repeated on the subsequent documents sent to you from other recipients so you can merge each user’s changes into a cumulative document.

Our Enterprise product has advanced features that the Standard routing product does not contain.  Highlights of these features include: routing history, archiving routing slip content to pdf, advanced comment tracking, setting reminders and due dates on messages, and more.
-See our changelog for details of the new version
-Read more about ORP Enterprise Version

Office Routing Plus For Office 2013 and Windows 8

The Office Routing Plus product is currently being tested for compatibility with Office 2013.  We are also testing for Windows 8.  If your company would like to test the product in your environment on Office 2013 or Windows 8, please let us know.

As of March 7,2013, Office Routing Plus (ORP)  is already successfully routing documents for approval for Excel on Office 2013 and we are just finalizing some changes for routing slips to work for Word 2013.

Office Routing Plus was initially launched in Office 2007 to replace the send to next routing recipient feature, which was removed in Office 2007.  Since its initial release, the product has become more than just a replacement for the original route to next option on Office 2003.  Our Enterprise product has many additional features for sequential and parallel routing and our Outlook version is now out in Beta. Contact orpsales@office-routing.com to evaluate Office Routing Plus in your Office 2013 or Windows 8 environment.

Probitas Solutions is announcing the release of Office Routing Plus for Outlook.  The product is now out in a Beta release.  The main highlights of this product are 1) The Outlook version allows users to route multiple documents at once for approval or route an email with no documents at all for approval.  2)  Route any type of document for approval (not just Excel or Word documents).  3) Future releases of the product will allow for real time tracking of documents that are out for approval. This means if you are the initiator or are signed up for status alerts on the routing document, you can view which recipient currently has the routing document from within a routing interface running in Outlook.  Request a demo version of the product by emailing orpsales@office-routing.com

Probitas Solutions, Inc. is working on creating routing slip capabilities in MS Outlook.  For three years now, customers of Office Routing Plus have enjoyed routing documents for sequential approval by setting document routing slips on MS Excel and Word documents from 2007 and 2010 versions of MS Office.   This new product for routing with Outlook will allow our customers to route email messages, inter-office memos, or any type of document and any number of documents for approval. Users will be able to route multiple documents and any type of document for approval.

Many users of Novell Groupwise are used to using routing slips in Groupwise.  Our product for routing slips for Outlook will be similar but will have advanced functionality for tracking the status of documents.

We are announcing a new release for Office Routing Plus Standard edition.  This is version 4.0; however, beginning with this version of ORP, we are creating a new version naming scheme based on release date.  So this code executable itself will be called Version 2012.04.10.

The following are the primary new features for version 4.0:
-Previous versions of ORP were limited to 255 characters in the body or comment section of the outgoing email to next recipient.  Users now have no limitation on the size of the comment/body.

-New reject document feature allows downstream recipients to reject a document with a comment and this goes back to the initiator with the document and a rejected status in the routing slip.

-Anyone can now be signed up for receiving status emails (and updated files at each step)-previously, only initiators could receive tracking emails that show the status of the routing process.  Either the initiator can sign up other recipients for tracking emails, or when recipients downstream receive the document, they can sign themselves up.

-Changed the track changes feature in MS Word so that initiator is now the only one who can toggle it and initiators now have the option to track changes at the time they enable this feature from ORP or only once they send to the first recipient.  If users downstream use the MS Word menu to turn track changes back off, ORP will set it back on (with no prompts to user) for the copy of the doc that gets routed out.

–When closing a document that has a routing slip, if the document can be routed to the next recipient by the current user, a new improved dialogue box will be shown which will allow the user to route with or without a comment to the next recipient, and it will also allow the user to disable this prompt (it can be re-enabled from configuration screen).

–ORP can now be configured to automatically delete the message that was routed to you from your Outlook inbox when you route this document to the next recipient (the deleted message will show in your deleted folder in Outlook.  Note this feature is enabled by default but users may turn this off if they’d like by using the configuration button).

Inquire about upgrading to our new Enterprise Product for Office Routing!

See our complete change log history for Office Routing Plus.